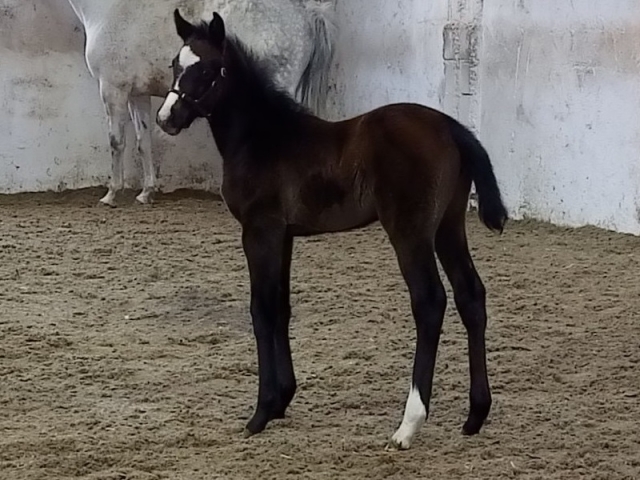 Colette is a very pretty, exceptionally athletic filly with a beautiful face by the highly desirable stallion Cornet Obolensky. She has an outstanding pedigree and is sure to make a top class sports horse and future broodmare and probably the only Cornet bred in the UK this year. Top class home only. SOLD

SIRE:- Cornet Obolensky 16.3hh 171cm 1999
Coronet Obolensky is one of the hottest up and coming young stallions in the world. At only 7 years old he had already reached international competition. The highly elastic paces and superb uphill canter are well combined with jumping qualities that are hard to equal in respect to capacity, leg technique and manner of jumping. His sire Clinton, son of the international icon Corrado I (Franke Sloothaak), himself a highly successful international show jumper, not only combines the premium national stallions Cor de la Bry?re, Landgraf I and Capitol in his pedigree but furthermore derives from Holstein bloodline 8829. The damsire, Heartbreaker, who was victorious in World Cup events, is a son of the probably most prominent Dutch sire of show jumpers of the past 20 years, namely, Nimmerdor. The grandam, a successful advanced class show jumper, produced the victorious international competition sports horse Querido (by Feinschnitt I). Cornet Obolensky was declared vice-champion and the darling of the public at the main Northrhine Westphalian approval of 2001. He absolved an exceedingly good 30 day test with an overall score of 8.33, leading the field in show jumping with the score of 9.24. He was moreover awarded the top score of 10 for loose jumping. He was presented successfully in show jumper competitions beginning in 2003, under Ludger Beerbaum and Marco Kutscher. Under Marco Kutscher, Cornet Obolensky effortlessly qualified for the Bundeschampionat as a five year old, and after a year of only breeding when he was six, he took front places in the international Youngster Tour in Arezzo/ITA, Lyon/FRA, Aselage-Gut Einhaus and Hachenburg when he was seven. At the beginning of 2007 he was successful in competitions in Mechelen/BEL and Münster. Cornet Obolensky is described by his team as friendly, unflappable and uncomplicated in daily handling. Cornet Obolensky was the sire of the champion colt at the 2004 German Foal Championships in Lienen. In 2006 a Cornet Obolensky son won silver in the For Pleasure ring with the best jumper foals in Lienen and a daughter became the 2nd Reserve Champion among the fillies. He now has several approved sons such as Corlensky G, Cornado NRW, Cristallo & Cornets Stern.

DAM:- Chi Chi 26/5/2003 Grey 16.1hh 165cms Holstein Bezirks premium Chi Chi is a very pretty mare with an excellent technique over a fence. She showed huge promise in competition when a freak accident ended her career. She is from the stamm 1333 and this family has been responsible for many approved stallions .Her mother, Mandra is the full sister of the international successful Contender son Connie with Armin Schäfer Junior. Her sire, the recently deceased but very successful Clearway, includes two pillars of Holstein horse breeding in direct combination, via Capitol I and Lord. His sire Capitol I always enjoyed great confidence and popularity among the breeding fraternity, siring outstanding show jumpers such as Carthago, Calato, Cassini 1 & 11, and others. The dam, Wodka II was mated with Athlet Z and gave birth to the approved Arturo and together with Caretino, produced the stallion performance test winner Conway. The dam-sire Lord won his approval and became a hereditary transmitter of extra-ordinary diversity, whose progeny had successes around the globe. Ramiro in the third generation was a sire of the century. Chi Chi?s dam Mandra is by Contender. Contenders sire Calypso II was one of the most significant sires of Germany. His progeny are characterised by good jumping ability and excellent ride ability. He left outstanding sires and performance horses of international format in Holstein and Hanover. Contender won the 1987 Adelheidsdorf stallion performance test. He was declared I-b main premium vice-champion in Oldenburg as a result of his excellent 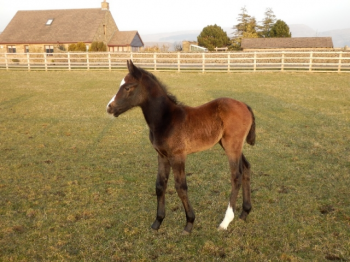 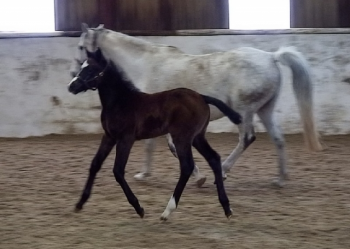 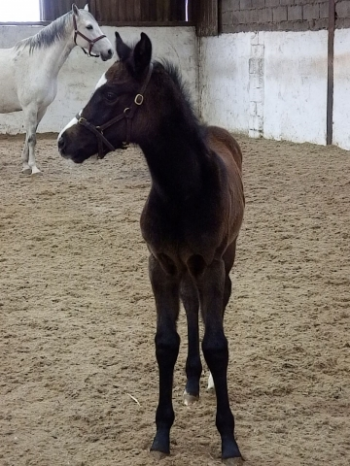