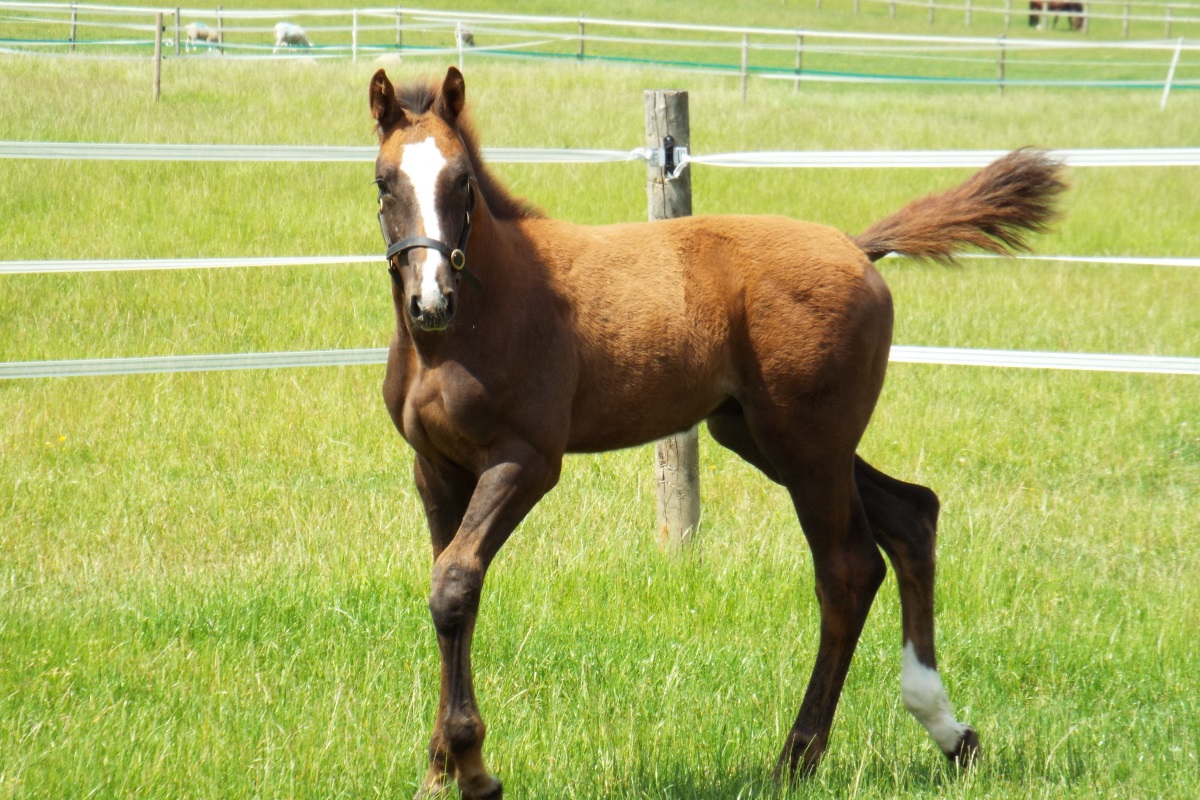 A super gelding who is a powerhouse.

A jumper stallion with an international career, a superior opponent in sport and consequently of great interest for breeding. He took the German Champion title in show jumping in 2006 in Munster and again in 2007 in Gera, both times with Rene Tebbel, won the World Cup in Oslo/NOR and with two sovereign clear rounds in Barcelona/ESP helped the German team win in the Nations Cup Super League. Before that he had been successful with his owner, Rasha Hareb (including winning an international show jumping competition at the Munich Indoors). Starting in April 2008 he continued his career under Ludger Beerbaum and they were victors in international competitions right away (e.g. the Nations Cup inRotterdam ). In 2009 Coupe de Coeur won the Grand Prix of Dortmund, the Riders Tour and took fourth in the Grand Prix of Paris. Coupe de Coeur was licensed in the Netherlands where he sired several foals that drew a lot of attention before he moved to Germany in 2005 where his first foal crop was born in 2006. Two sons from his very first crop were licensed in Redefin in 2008, Coster and Cheval de Coeur. Cheval de Coeur was the Reserve Champion Stallion and the top priced stallion at the Mecklenburg Stallion Auction, selling for 95,000 Euros. In 2009 in Hanover , his licensed son Coeur de Cento was also one of the top priced stallions at the Hangtstmarkt in Verden.

From a breeding standpoint, his sire, Calido I, is the most influential of the Cantus sons. Calido I belongs to the “family jewels” in Holstein breeding. But most significant for spreading this line is Coupe de Coeur’s dam, Adele.

So far, this bay mare has given birth to three international show jumpers of rank and besides Coupe de Coeur, Russel is also licensed. Born 1995, the gray Russel by the Holstein sire, Corofino I, who is certainly the most effective of the Corrado I sons, was licensed in Great Britain and is highly successful in sport with Nick Skelton/GBR. Springpferdezuchtverband Oldenburg-International has approved him for Germany . Russel’s one year older full sister, California , has won many advanced (S) level show jumping classes and is successful in Grand Prix and Holger Hezael. Adele, who is by Lincoln , is one of the older sons of Landgraf I, who bred in Baden-Wurttemberg, Holstein and Denmark . The next link in the chain of ancestors is the chestnut French stallion, Urioso, who was active in Holstein for three years. Coupe de Coeur’s granddam, Kolin, who was born in 1973, was a very fertile mare. In Holsteinbreeding, she produced not only Adele but also other registered daughters by the stallions Sympatico, Lord and Zunftiger xx. Kolin’s dam, Wyk, brought attention to the line for the first time in the 1970s when she became the dam of the chestnut stallion, Nassau by Sable Skinflint xx, who actively bred in the Netherlands .

Quitania is by Colman who is known to produce very good jumpers and is a very promising young sire and has already produced more than a dozen licensed sons. He was placed first at the stallion performance test in jumping (he scored 123.7 points, at the 1999 stallion performance test in Marbach). Colman has won and had high placements in elementary and intermediate show jumper tests.

Colman\\\\\\\\\\\\'s sire Carthago Z was under the auspices of the Holstein Association for a number of years, before going into the services of the Dutch Nations Cup riding team, where he has had one success after the other. The Dam-Sire Lord, the approval winner of his age-class, also covered in Wohrden for a few years, where Colman is currently stationed. Lord belongs to the siring legends of the Holstein breed and made breeding history throughout Europe.

The thoroughbred Marlon, who was characterized by a decidedly versatile heredity, appears in the third generation of the pedigree. His progeny were victorious in all types of disciplines on an international level. Quitana\\\\\\\\\\\\'s stunning State Premium dam,Quibell is by the stallion Quattro B who is a son of the Selle Francais stallion Qredo de Paulstra, winner of the Grand Prix of Bordeaux. Qredo is sired by the legendary Galoubet, who twice won World Cup Qualifiers and produced international jumpers such as Quick Star. Quattro was 2nd in his Performance Test with a high score of 130 points and in 1994 he was Reserve Champion of the Oldenburg Korung, based on his performance test and his first offspring. Quattro jumped very well in 1996 with his rider Gilbert Bockmann and they won more than 20 1.30 courses through the summer. Meanwhile Quattro jumps on the international circuit successfully. His offspring show spectacular gaits and also are beautiful types and free jump very well.

Since 1997 Quattro has more than 10 approved sons and remarkably had two children qualified for the Olympics in Athens 2004; Quando Quando for dressage and Oliver Q for jumping! Quicksilber won the gold medal at Lanaken in 2005.Quitana\\\\\\\\\\\\'s grand dam Jessica got the top prize at her mares performance test and was also awarded State Premium. She is by Accord 11who is by Ahorn of which five of his progeny qualified for the federal show jumping championship in Verden in 1992, with Acord II finishing as vice champion. Acord II convincingly won the stallion performance test in 1991 scoring 9.5 to 10.0 for show jumping and 9.0 to 9.67 for ride ability. He was also the most successful five-year-old stallion in Germany with a tally of 21 wins. He continued his sporting career winning grade-A show jumping competitions and achieving placements in advanced classes. He is one of the most sought after stallions of Europe, since he transmits attributes of nobility, ride ability and exceptional jumping values. 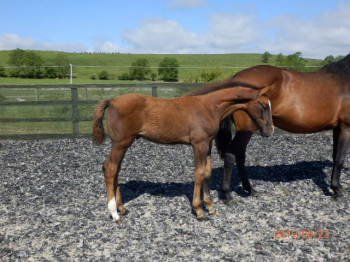 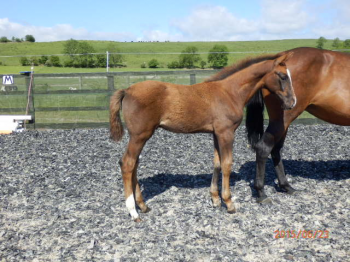 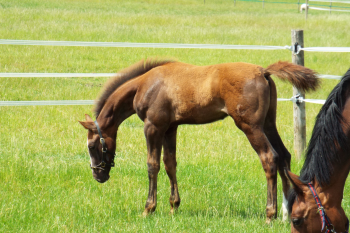 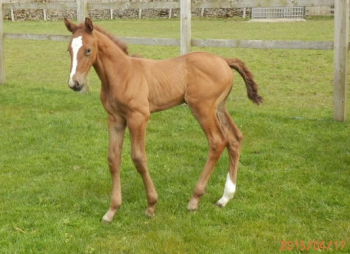 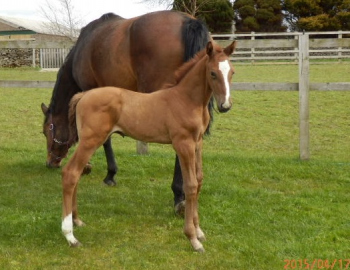 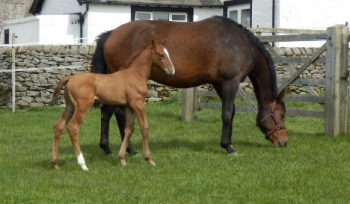 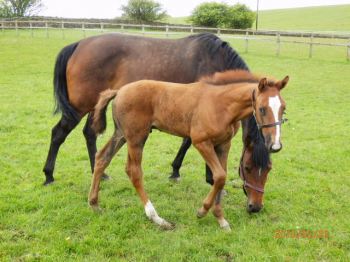