Vincent is a modern type quality warmblood sport horse with extravagent off the floor paces, good jumping technique and an outstanding temperament.

Vincent has now been sold to Wylderswoode Stud where he will continue to stand at stud. Please contact them for further details. Tel 01204 450150 www.wylderswoodestud.co.uk

Vincent's sire "ELCARO" is one of the most successful Grand Prix horses in the Netherlands with a very high breeding index of over 160 for dressage. His elastic trot and fantastic temperament helped him win the National Stallion Competition final in 1990/91 where he scored 9's for his temperament and stable manners and an impressive 8.5 for his trot.

Vicent's damsire "SAMBER" needs no introduction being not only a Grade A Showjumper but also a Grand Prix dressage horse. Vincent has inherited his father's expressive head, power and agility in his paces and his fantastic temperament.

Vincent has already been successful in the show ring during 2005 including:- winning the 3 year old potential sportshorse class at the S.H.G.B. Northwest Spring Show and Reserve Champion overall. 2nd place at the Potential Competition Horse Show at Osbaldeston for 3 year old colts and geldings. Placed at the Great Yorkshire Show in the CHAPS non-native youngstock class. Winning the 3 year old potential Sporthorse Class at the Royal Lancashire Show and Reserve Champion Overall. Winner of the three year old sports horse and best 3 year old in the loose jumping at the CHAPS Championship Show.

During 2006 he was second at the 4 year old ridden sports horse class at the SH GB spring show and he was also Champion Sportshorse at the CHAPS Championship Show.

His first crop of foals born in 2006 have inherited his superb athleticism and quality as displayed by his daughter Vanilla. She was awarded a first premium with an overall score of 8.4 at the BEF futurity scheme qualifiers.

His second crop of foals born in 2007 have exceeded all expectations with the quality and the high percent of coloured foals (78%). Many breeders have returned their mares in 2007 being delighted with the type of foals he has produced. His offspring are now been recognised in the show ring as several of his youngsters have been placed 1st and Champions in foal and coloured classes. Our own Millfield Viva again being awarded a first Premium at the BEF Futurity evaluations.

In the autumn of 2007 Vincent went to Holden Fold Dressage Stud in Lancashire for semen to be collected for freezing and also for dressage training. Whilst there he was in the ribbons on each occasion out and winning his first affiliated test.

Judges have described him as
"a super horse showing some lovely energy to the paces (8)"
"super, quality talented horse- well presented (8)"

Angela Crane of Holden Fold an International Dressage Rider also rates Vincent as one of the best coloured dressage stallions she has seen with the potential and trainability to compete at the highest levels.

After the stud season in 2008 Vincent has been with one of our vets Louise Millar who competes at dressage for pleasure. He has won or been placed every time out at Novice and Elementary and has qualified for the Regionals at both levels gaining 50 points in 8 outings. 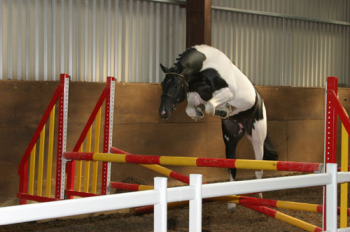 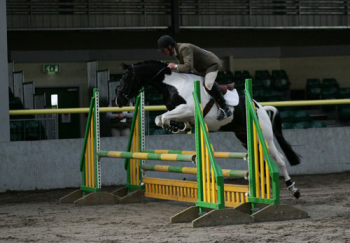 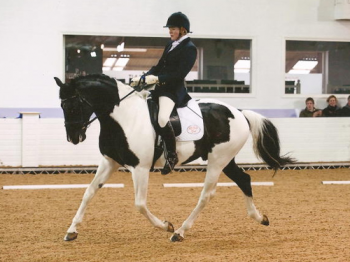