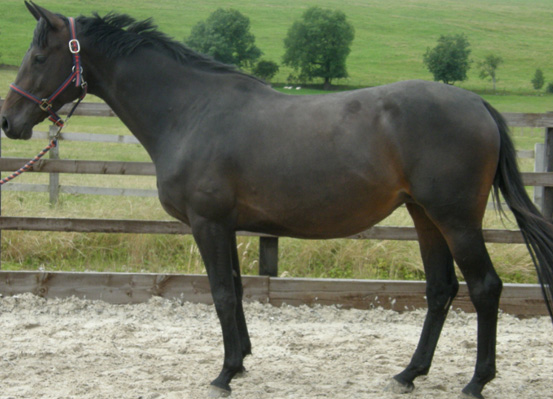 A beautiful, dark bay mare with superb paces and an outstanding temperament with all the attributes of a modern type top class competition horse.

She has already been shown in hand with great success being placed every time out including a 3rd at Bramham 2005 in the foal class likely to make a 3 day event horse.

Awarded 1st Premium at the British Breeding Futurity Scheme in 2005 and 2006 and was the highest scoring yearling.

She won the eventing yearling championship and was reserve champion overall at the British Breeding Futurity Finals.

She has had a lovely colt foal in April 2009 by Coriano Z called Millfield Corianton She has been scanned in foal to the fantastic coloured Jumping stallion Utah van Erkepom and is due in May 2010.

She will windsuck when stabled for long periods and so needs a home with as much turn out as possible. Regretable sale to good home only of this lovely mare.

Once A Day 16.1 hh 165cm 1999
Once A Day is by Kanudos who is a thoroughbred dressage stallion who has stood in Holstein and is now standing in Denmark. Her dam is by Lago Maggiore who competed at the Olympics for Germany in 3 day eventing. Once A Day has excellent paces and was awarded a First Premium at her mares test in Germany. She has been successfully shown in 2005 being placed every time out and won the broodmare class at Bramham for a mare likely to produce a 3 day event horse. 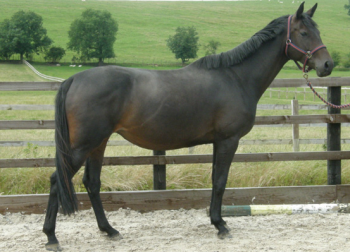 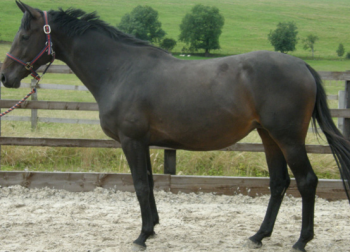