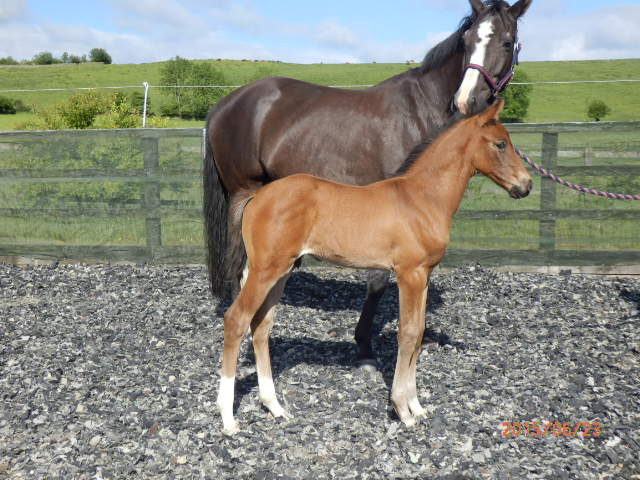 A super quality colt, to be expected from an outstanding dam and sire. He is good looking, athletic and brave with all the qualities for top class sport.
Gained a higher first premium at the BEF futurity and awarded a Premium by the Oldenburg

Hardly ever in its history, the Holsteiner stallion licensing in Neumünster has seen an equally clearcut and celebrated champion as in 2007. Diarado’s description by breed director Dr. Nissen reads as follows: “The champion stallion oozes incredible charisma and epitomizes the modern sport horse type to perfection. His magnificent type goes along with a good topline, a powerful back and four perfectly correct legs. His basic paces improved from a fairly good walk to good trot, crowned by a perfect canter. But his presentation reached fever pitch in the free jumping phase where he demonstrated perfect control from the very first approach, and jumped with a flexible body, excellent leg technique and unbelievable scope, which earned him a 10.0.” He carries world champion blood on the top of his pedigree, with his sire, Diamant de Semilly a member of the gold winning French team under Eric Lavallois at the Jerez world championships in 2002. Diamant de Semilly boasts performance blood all over and is – just like his sire Le Tôt de Semilly, an own son of legendary Grand Veneur – one of the most successful French stallions. Diarado’s dam is by Holsteiner jump horse sire Corrado I and a full sister to the licensed stallion Crawford. Through the famous stallions Lord and Ramiro, the dam line goes back to the highly successful line 318D2 bred by the Bernhard family. This mare family has produced the breeding stallions Corofino I + II, Coriano, Chello I + II as well as the champion stallion Camiros. Diarado passed his stallion performance in Schlieckau with flying colours. With his total index at 150.57 (1st place), his jumping index 144.01 (1st) and his dressage index at 138.42 (2nd) he proved the test group’s stand-out stallion. In 2009, Diarado was already shown in competition and won a young jumper class at A level under Bastian Freese scoring 9.0. In 2010, Diarado attracted attention with top scores in young jumper classes. At the Bundeschampionat he won the fi rst two qualifi ers, scoring 9.0 and 9.3, respectively, and placed 3rd in the final scoring 9.0. In 2011, he won young jumper classes at M* level in Vechta and in Cloppenburg and qualified for the Bundeschampionat. In 2013, he achieved several high placings in jumper classes at S level. Diarado’s foals realize top prices, the top-selling lots of the Elmhorn foal auctions in 2011 and 2013 were Diarado offspring. As yet, 20 of his sons have been licensed in Germany, among them premium stallion Dinken, licensed for Holsteiner breeding at Neumünster in 2012, and De Quidam, champion stallion of the Vechta OS stallion grading in 2013. Horse Performance Test, Schlieckau, 2008: 1st/29 total; 150.57 (Dressage 138.42 2nd placce and Jumping 144.01 1st place) Breeding Value Index, 2013: Jumping 169 (90%); dressage; 111 (90%)

Fair Play is a State Premium mare who is also trained up to medium level dressage. At her mare performance test she was placed 1st out of 82 mares and received 9's for her walk and trot, 9.5's for her canter and loose jump and 8.5 for rideability. She was also placed 1st at the Rhineland mare show and 4th in the European mare show in Brussels. She has already produced a stallion son by Munchhausen. She has been on a dressage yard /stud in Germany after being purchased for a large sum of money as a 3 year old. She was imported in 2005 and put back into work and has been competing at show jumping, up to Foxhunter level. Ferragamo is by Freigraf who is by the legendary Furioso 11. Freigraf was campaigned very successfully by the Paul Schockemohle stables becoming the national vice-champion show jumper in 1992 at Verden. Ferragamo's dam Elona competed at eventing with outstanding success. Ferragamo was vice-champion at his approval and runner up at his performance test gaining a score of 10 for rideability. He then went on to produce 12 approved sons from his first batches of foals and his son Falcone was sold for a record 280,000 DM at the Elite auction. Fair Play's dam is by Damenstolz who was a highly modern and very handsome stallion who goes back to Duellant via Duft 1 who revolutionized the dressage sport. Damhirsch who was trained up to Grand Prix level also had a fruitful siring career in Westfalia for a long time. Her grand dam was a State Premium mare by Fruhlingstraum 11 who was an approvals winner and procreator of dressage horses and show jumpers of the finest quality and produced many approved stallions and numerous performance horses, the most famous of all being Fire 2, the 1982 World Championship show jumper. First Lady also produced the Westfalen stallion show jumping stallion Polytraum and also Remondo, Paulaner and then the successful show jumper Panther 106.
Select a video: 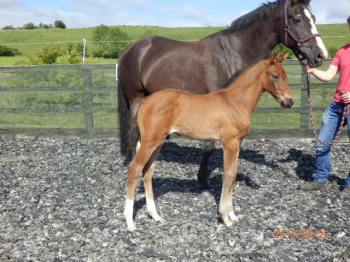 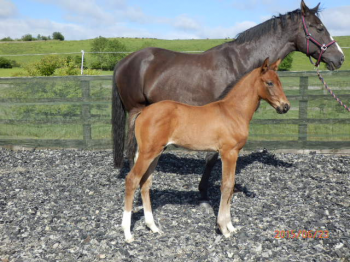 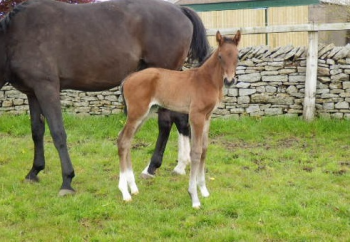 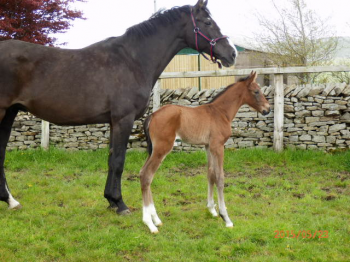 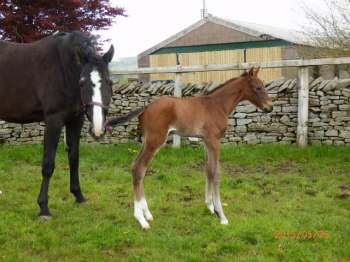