Sold at the Elite foal sale at Addington to Old Lodge.

The pedigree of Eurocommerce Berlin consists of the best Holstein show-jumping lineages combined with a powerful dam-line. Sire Cassini I (by Capitol I) caused sensation in the international show-jumping sport under Franke Sloothaak. And in breeding Cassini I has been at least as successful with a series of offspring active in the international sport such as Ingmar, Coco, Cumano, Carino and Olympic. Remarkable is also the fact that Berlin\'s dam Estia (by Caretino) has been successful at the highest level of show-jumping under her sporting-name Cathleen W, ridden by Marc Wirths. This mare definitely did not get her jumping genes by accident. Her grand-dam Ostia (by Freeman xx) became world-famous under the name of Frimella. Ridden by respectively Alois Pollmann-Schweckhorst and Willi Melliger this noble mare cantered many laps of honor. After her sports-career Frimella produced, among others, the international show-jumping horse Lorina II (by Lombard). The family of Berlin, Holstein lineage 890, is one of the most successful sports-lineages in Holstein breeding. Other reputable members of this family are, for instance, the famous Grand Prix show-jumpers Feodora, Crocodile Dandy, Corinessa, Quebec, Tinka\'s Lad and Caitano.

Lux Z was one of the most successful stallions in international showjumping. with Jerry Smit, Lux Z participated in the 2000 Sydney Olympics and he won the Pulsar Crown competitions in Valkenswaard and Cannes bringing Lux Z\\\'s total winnings to more than a million euro. His sire, Lord Calando (Lord), is just like the world-famous jumping stallion Carthago Z (Capitol I), bred out of Perra (Calando I). Lord Calando is the sire of many international showjumping horses such as; Locanda (Marcus Ehning) and Lukas (Emma Wester). The Hanoverian stallion Lux Z was bred at Zangersheide Stud Farm out of the Holstein mare Apocalypte Z (Ahorn Z), a product of lineage 2543. This famous Holstein family was also responsible for the licensed stallions Lavallo, Lasino and Lone Star. Lux Z has produced foal class champions, mare class champions and showjumping competition winners and in the Netherlands, Lux Z supplied no less than five licensed sons including Lupicor-H and Non Stop.

The dam line is a Holstein one from the stamm 4705 which produced Rocadero, Levantos 1 & 11 and Catoki. The dam Landjuweel is by Calato who is one of the most accomplished sons of the sire of show jumpers Capitol I, who passed his exceptionally great aptitude for jumping. Calato was bred out of a daughter of the Holstein sire of the century, Landgraf I, who when measured by the life winnings sum of his progeny alone, perpetually leads the breeding value rating as the best hereditary transmitter of show jumpers. Calato absolved his stallion performance test in the front rank of his age class in Medigen in 1990 and was then successfully ridden by Herbert Blocker in advanced show jumping competitions. The grand dam Brasilia was also by the infamous Landgraf 1 and the great grand dam Ucera is by Calypso 1who like no other Holstein stallion, presented exceedingly versatile progeny. Ucera also produced the stallion Land Earl and her daughter Fucera produced the stallions Chalan and Chateau. 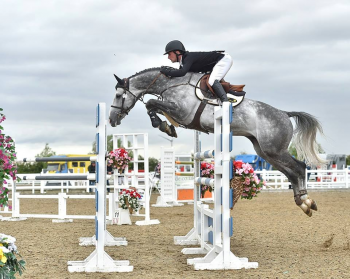